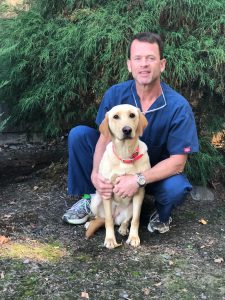 Dr. Chris, the 2nd of 7 boys in his family, grew up locally surrounded by animals. He received his undergrad in Biology at Eastern Oregon University. He then went on to earn his Master’s Degree in Neuroendocrine Immunology from Brigham Young University in Provo, Utah. His passion has always been animal health, which led him to WSU and OSU, where he graduated with a Doctor’s of Veterinary Medicine.

Dr. Chris raises Corriente cattle and has an assortment of animals including goats, chickens, pigs, and a yellow lab named Rogue. He enjoys spending time with his wife, Karen, and their five children. 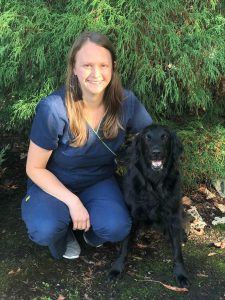 Dr. Fumasi is a native Oregonian and graduated from Oregon State University. She sees cats, dogs, and pocket pets. She has a special interest in surgery and internal medicine. She has a flat-coated retriever named Amythyst and an orange tabby named Stewart. She also has one Beta fish named Chili who spends his days taunting Stewart.

In her spare time, Dr. Fumasi enjoys reading, hiking and spending time with her husband and 2 children. She is at Canterbury Animal Hospital every Friday. 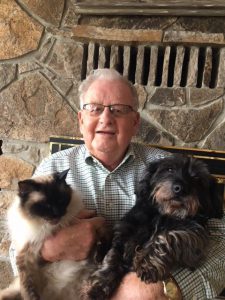 Dr. Werner’s passion for animals and veterinary medicine goes back to his pre-teens. He had dogs, cats, several ferrets, and a pet raccoon. For a 4-H project, he raised pigs for several years until one night they got out and ate all his mother’s and neighbor’s flowers. The pig project ended with a lot of pork chops and bacon.

He is originally from Ohio and graduated from Ohio State University. He received his B.S in Animal Science and Zoology. He graduated in 1964 and did a one year internship at an equine practice in Kentucky.

Following his internship, he wanted to try a new area of the country and moved to Oregon. He worked in a small animal practice in Tigard and after one year, started his own practice, Raleigh Hills Vet Clinic. His practice built up quickly and had five general practitioners as well as board certified specialist, internist, orthopedist, soft tissue surgeon, neurologist, dermatologist, ophthalmologist and a dentist.

In the early 70’s, he saw a big need to offer better emergency services than individual practices could offer. He needed to have a facility that was both staffed and equipped for emergency work. It would be open all night and weekends much like human hospitals. This idea had not been tried in the country so it was a new adventure but he knew it would work. He put together a board of four other veterinarians. The project was funded by Mr. A.B. Lewis who wanted it named after his wife who recently had passed away. In August of 1973 they opened the Dove Lewis Emergency Veterinary Hospital. Dove Lewis has grown from one doctor on duty, to now having multiple doctors on duty as well as board certified specialists.

After many years, Dr. Werner sold his practice in 2006. After 6 months, he found himself missing vet medicine and worked several years in a small practice in Newberg near his home. A few years later he started working a day or two a week for Dr. Cox at Canterbury. We are happy he has decided to stay with us after Dr. Cox retired. Dr. Werner looks forward to seeing your family’s pets when he is at the clinic every Thursday.

He lives with his wife on a small farm outside of Newberg where they have Percheron draft horses, a dog, and two inside cats. They have 4 adult children and 4 grandchildren.